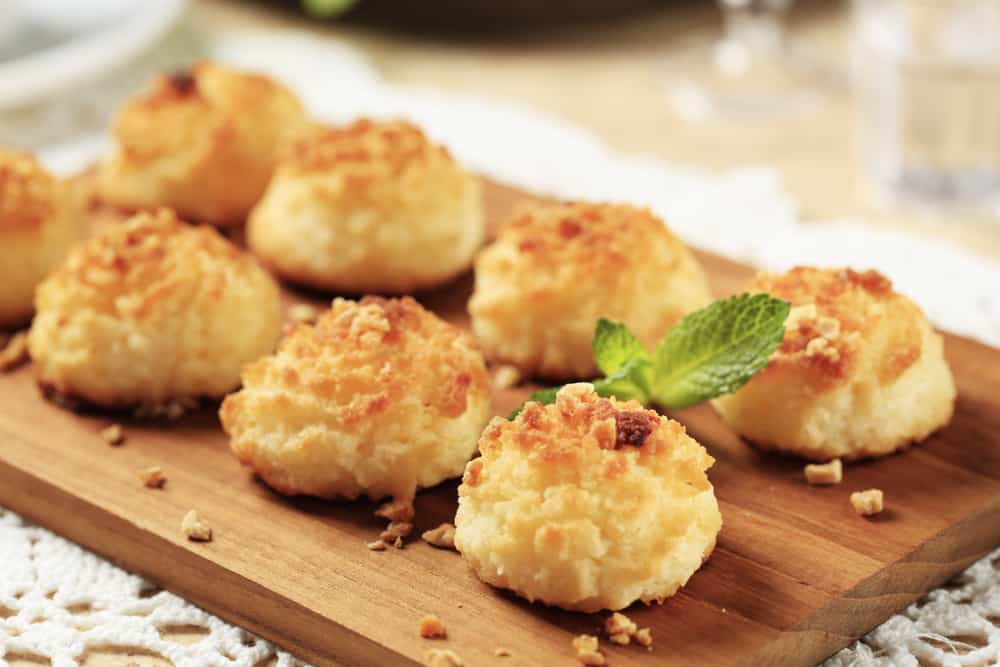 Macaroons don’t always get the respect they deserve. Admittedly, they’re not the fanciest. Their name doesn’t entice like, say, the Red Velvet Cupcake. They’re the nondescript, sometimes last resort, go-to when you completely forgot you had to bring something for dessert to your in-laws.
So let’s take a few minutes to allow the Macaroon to step into its spotlight. For starters consider this: the two main ingredients of a coconut macaroon are coconut and egg white. Yes, there’s sugar and a touch of vanilla essence but honestly, the coconut and egg white take center stage here.
Let’s talk about the number one ingredient: desiccated coconut. In case you’ve been wondering, desiccated is just a weird word used to describe dehydrated coconut and it’s hella good for you. In fact it’s so good for you that it provides minerals that strengthen your connective tissue.
An ounce of desiccated coconut has about 800 micrograms of manganese and 200 micrograms of copper—both of which support healthy collagen production keeping tissues strong.
Desiccated coconut is also high in iron, has zero cholesterol or trans fats and is rich in dietary fiber and saturated fat said to prevent neurological disorders such as Alzheimer’s because it protects nerve cells from toxic protein plaques.
Next up is egg white. Gone are the days of thinking all the protein lies in the yolk. More than half the 6 grams of protein in an egg are actually in the albumen (the egg white). The white also has most of the egg’s niacin, riboflavin, magnesium, potassium and sodium but none of the fat or the cholesterol.
The third ingredient is sugar. But honestly, it’s not a lot considering it gets dispersed and if you really want you can substitute it with honey or stevia.
You guessed it, the word “Macaroon” comes from the Italian “maccarone” meaning paste and variations on the coconut macaroon are found around the globe.
The French call it “congolais” or “le rocher a la noix de coco”. In Puerto Rico, they add lemon zest and call them little coconut kisses— “besitos de coco”. In Spain they’re made with hazelnuts and honey and called “carajito”. And in the Dominican Republic they’re spiced up with ginger and cinnamon.

(These little balls will keep for about 3 days in a sealed container.)
Try them! You won’t regret it. And nor will your in-laws. ?